"Head in the clouds while still wearing the blue collar shoes
my father gave me....from football to free jazz and everything
in between"

That is the motto of this blog, and it's time to really put that into action because it's everything that I am really about.  I was the guy with the dyed black hair and studded white leather belt getting insane looks when showing up at sports bars in Chicago to watch the Steeler's games.  And I was the guy that was smirked upon by the other so called open-minded creative type people for liking sports and football specifically (and while we're on that topic, all of you art rock haters back then who suddenly recently became soccer fans because it's now so fucking hip to watch soccer can lick my taint).  I was at the last Indian Summer show at  924 Gilman Street on August 12th, 1994 to witness the decedent emo dance party that broke out on stage, and I was at the last Pittsburgh Steelers game ever to be played in Three Rivers Stadium on December 16, 2000, as well as the first regular season NFL game ever to be played the next year when Heinz Field opened up, but more on that later.  In the same year in 1996,  I saw the Chicago World Premier of the Steve Reich / Beryl Korot collaborative video/live musical performance piece "The Cave, and I climbed up a Chicago El train tower to drunkenly celebrate another Chicago Bulls NBA Championship.  I've been rock-star drunk at the Chicago Symphony, and was peeking at a TV for another Bulls score while at a Bedhead show.  And it all makes sense to me.  "From football to free jazz and everything in between."

Back to the task at hand though, in the exploration of my dichotomous life and the overlap of art and sport, I bring you the first in the series of "Kmart Debutante" Face-Offs", where the heavy hitters of each category will face off to decide an ultimate winner.  For the first installment, we have to go big and toss the pigskin and the mic to two of the greatest "Sanders" of each side:  Pharoah Sanders vs. Barry Sanders: 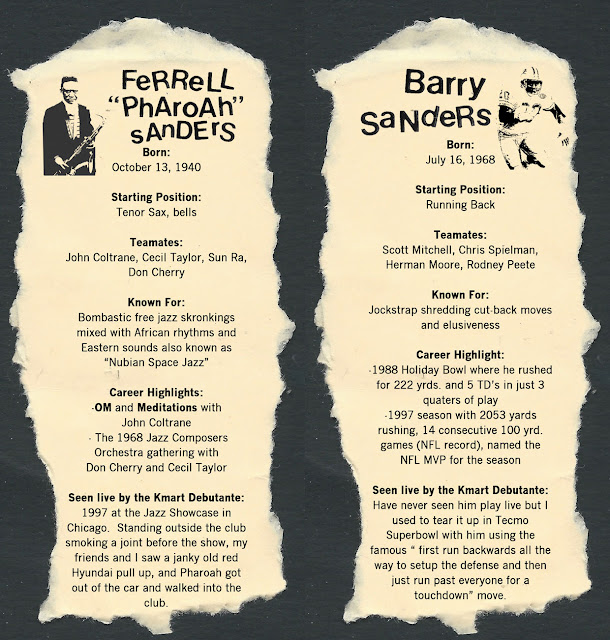 All right, this one appears to be too close to call, we're going to have to turn to the tape here and see who the winner is:

Let's take a look at one of the judges scorecards and see if we can gauge where they might be leaning on this one:

The Kmart Debutante might be conceptual, but I'm also Americana as fuck.  I grew up in the Laundromat part of society, cut my teeth in my teen years at the Arby's Roast Beef Emporium, and in my adult life I love to watch in fascination and disbelief when bold, over-the-top moves that up the ante in the great slow genocide program called the fast food industry are brought to market.  For the winner here, I've got to "Double-Down" on this and go in a whole different direction.  In the 1st ever Kmart Debutante Face Off:  Sanders vs Sanders, the winner is...........

Posted by the_immaculatedeception at 6:12 PM